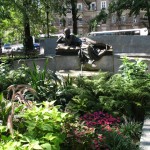 Jeff Benjamin used his experience and pulled away from Alberto Garcia in the final mile to capture the 63rd annual Muche-Struck three-mile run, held at Clove Lakes Park.

Benjamin was timed in 17:12, while Garcia clocked 17:18. The female title went to 38-year-old Eileen McLoughlin Gleavy, who ran the New York City marathon on Sunday in just over four hours.

Yesterday, she was an easy winner in the female division, running 22:01.

“Al is a tough competitor at the end,” said Benjamin. “I knew I had to put some space in between us.”

He did exactly that.

After a slow first loop. Benjamin took the lead for the first time and began to apply some pressure.

Garcia, getting back into good racing shape, stayed close, but could not match Benjamin in the final mile.

“I knew he’d push in the middle,” said Garcia, “but for me, this is a victory. It felt like a comfortable race.”

McLoughlin-Gleavy ran yesterday “for enjoyment, and I’m a role model for my three kids.”
Patricia Mulligan and Jennifer Thomas, the second and third-place finishers, respectively, never mounted a serious challenge.

She found herself in front, and said, “I felt really good.”

The Results for Female Overall

1. Eileen McLoughlin-Gleavy 22:01  This is a member of Nxt Level. We congratulate Eileen on her victory. We are very proud of all her personal accomplishments. Keep it up Eileen…till the next race.