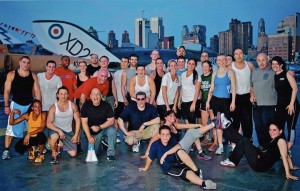 Seven rounds for time of:

Watch this woman, Allison, perform what they call a transfer skill… “The Snatch Balance”

**Coach Juan this is for you… Bear Hug Drill, Tony Blauer [wmv]

SPEAR is a Bridge to Your Next Move, Tony Blauer [wmv]

Did you answer 3 and 10? Of course you did. It’s the Pavlovian response. After all, anyone who’s ever picked up a dumbbell knows that doing 3 sets of 10 reps of each exercise is the quickest way to build muscle.

Except it’s not. In fact, it’s the quickest way to get nowhere with your workout routine, says Michael Mejia, C.S.C.S., a long-time Men’s Health fitness advisor.

Truth is, today’s most sacred exercise guidelines originated in the ’40s and ’50s, a time when castration was a cutting-edge treatment for prostate cancer, and endurance exercise was thought to be harmful to women. Worse, so-called fitness experts across the country are still spewing these same old conventional wisdoms, despite plenty of research indicating that they (the experts and the wisdoms) aren’t wise at all.

Chances are, these are the rules you exercise by right now. And that means your workout is long past due for a 21st-century overhaul. We asked Mejia to do just that. Here are the five muscles myths he most commonly hears. Hopefully, we’re about to bust them for good.

BONUS TIP: Get back in shape—and stay lean for life! Check out our list of the 100 Best Fitness Tips Ever!

MYTH #1: DO 8 TO 12 REPETITIONS
The claim: It’s the optimal repetition range for building muscle.

The origin: In 1954, Ian MacQueen, M.D., an English surgeon and competitive bodybuilder, published a scientific paper in which he recommended a moderately high number of repetitions for muscle growth.

Here’s the deal: Higher tension—a.k.a. heavier weights—induces the type of muscle growth in which the muscle fibers grow larger, leading to the best gains in strength; longer tension time, on the other hand, boosts muscle size by increasing the energy-producing structures around the fibers, improving muscular endurance. The classic prescription of 8 to 12 repetitions strikes a balance between the two. But by using that scheme all the time, you miss out on the greater tension levels that come with heavier weights and fewer repetitions, and the longer tension time achieved with lighter weights and higher repetitions.

The new standard: Vary your repetition range—adjusting the weights accordingly—so that you stimulate every type of muscle growth. Try this method for a month, performing three full-body sessions a week: Do five repetitions per set in your first workout, 10 reps per set in your second workout, and 15 per set in your third workout.

MYTH #2: DO 3 SETS OF EACH EXERCISE
The claim: This provides the ideal workload for achieving the fastest muscle gains.

The truth: There’s nothing wrong with—or magical about—doing three sets. But the number of sets you perform shouldn’t be determined by a 50-year-old default recommendation. Here’s a rule of thumb: The more repetitions of an exercise you do, the fewer sets you should perform, and vice versa. This keeps the total number of reps you do of an exercise nearly equal, no matter how many repetitions make up each set.

The new standard: If you’re doing eight or more reps, keep it to three sets or less. If you’re pounding out less than three reps, you should be doing at least six sets.

BONUS TIP: When it comes to making lifestyle changes that will improve your health, your first step is the most important one. Start here: 20 Little Changes for a Healthier Life.

MYTH #3: DO 3 OR 4 EXERCISES PER MUSCLE GROUP
The claim: This ensures that you work all the fibers of the target muscle.

The origin: Arnold Schwarzenegger, circa 1966.

The truth: You’ll waste a lot of time. Here’s why: Schwarzenegger’s four-decade-old recommendation is almost always combined with “Do three sets of 8 to 12 repetitions.” That means you’ll complete up to 144 repetitions for each muscle group. Trouble is, if you can perform even close to 100 repetitions for any muscle group, you’re not working hard enough.

Think of it this way: The harder you train, the less time you’ll be able to sustain that level of effort. For example, many men can run for an hour if they jog slowly, but you’d be hard-pressed to find anyone who could do high-intensity sprints—without a major decrease in performance—for that period of time. And once performance starts to decline, you’ve achieved all the muscle-building benefits you can for that muscle group.

MYTH #4: NEVER LET YOUR KNEES GO PAST YOUR TOES
The claim: Allowing your knees to move too far forward during exercises such as the squat and lunge places dangerous shearing forces on your knee ligaments.

The origin: A 1978 study at Duke University found that keeping the lower leg as vertical as possible during the squat reduced shearing forces on the knee.

The truth: Leaning your torso too far forward, so that your knees stay back, is more likely to cause injury. In 2003, University of Memphis researchers confirmed that knee stress was 28 percent higher when the knees were allowed to move past the toes during the squat. But the researchers also found a countereffect: Hip stress increased nearly 1,000 percent when forward movement of the knee was restricted. The reason: The squatters had to lean their torsos farther forward. And that’s a problem, because forces that act on the hip are transferred to the lower back, a more frequent site of injury than the knees.

The new standard: Watch a toddler squat. Push your hips back as far as you can, while keeping your torso as upright as possible. This will reduce the stress on your back and knees.

MYTH #5: WHEN YOU LIFT WEIGHTS, DRAW IN YOUR ABS
The claim: You’ll increase the support to your spine, reducing the risk of back injuries.

The origin: In 1999, researchers in Australia found that some men with back pain had a slight delay in activating their transverse abdominis, a deep abdominal muscle that’s part of the musculature that maintains spine stability. As a result, many fitness professionals began instructing their clients to try to pull their belly buttons to their spines—which engages the transverse abdominis—as they performed exercises.

The truth: “The research was accurate, but the interpretation by many researchers and therapists wasn’t,” says Stuart McGill, Ph.D., author of Ultimate Back Fitness and Performance and widely recognized as the world’s top researcher on the spine. That’s because muscles work in teams to stabilize your spine, and the most valuable players change depending on the exercise, says McGill. Read: The transverse abdominis isn’t always the quarterback.

In fact, for any given exercise, your body automatically activates the muscles that are most needed for spine support. So focusing only on your transverse abdominis can overrecruit the wrong muscles and underrecruit the right ones. This not only increases injury risk, but reduces the amount of weight you can lift.

The new standard: If you want to give your back a supporting hand, simply “brace” your abs as if you were about to be punched in the gut, but don’t draw them in. “This activates all three layers of the abdominal wall,” says McGill, “improving both stability and performance.”

Posted in Conditioning, Heavy Day, Kettlebell, Ready For Anything
Scroll To Top