Here are the movements…

‘Sriracha: 4 Recipes for a $5 Ingredient’

Nicknamed “rooster sauce,” this exotic-sounding condiment is made in Southern California. Say it sir-ra-cha—and get a bottle in the Asian foods section of the supermarket, from amazon.com, or even at Walmart to taste what this hot trend is all about. 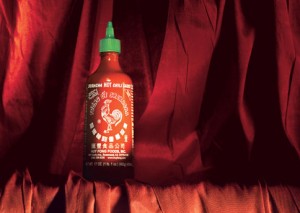 The addictively spicy chili sauce becomes more and more popular by the day. Chef Daniel Patterson tells the great American rags-to-riches story behind the sauce and shares amazing recipes from a potluck of sriracha dishes.

Chefs are not complicated creatures. A steady stream of articles, books, and television shows have attempted to ferret out our secrets, which is a little like using quantum physics to understand a transistor radio. We like food, dive bars, and loud music, basically in that order. And we love sriracha. We put the addictive red chili sauce on everything we eat, from eggs to rice, stews, soups, and stir-fries. I have heard tales of sriracha brioche and sriracha Bloody Marys. Years ago, one of my cooks made sriracha lemonade, which, frankly, was a bit beyond the pale. But it does show the intensity of our devotion to the stuff.
The genesis of the sauce’s popularity in the United States is straight out of the immigrant-success-story textbook. David Tran came to the U.S. from Vietnam, eventually landing in Los Angeles in 1980. He couldn’t find a chili sauce that he liked, so he decided to make his own, which he sold out of the back of his van. As his following grew, he moved into a processing facility in Rosemead, a Los Angeles suburb, and began adding other sauces—sriracha, named after the traditional Asian chili sauces from the seaside town of Si Racha, Thailand, was by far his most successful. Tran’s Huy Fong Foods now sells more than 10 million bottles of it a year.
When I visited the Huy Fong plant, I paused for a moment outside the front door, the Southern California heat rising off the pavement, thinking that this must be how ancient explorers felt before entering a sacred temple. Inside the cool, clean warehouse is a stack of 55-gallon drums, which hold the chiles that are the base for the sauces. The jalapeños are contract-grown on nearby farms, and as they ripen they are brought to the factory, where they are pickled in salt, vinegar, and preservatives. The color of the sauce varies from batch to batch according to the ripeness of the chiles, which is highly unusual in a processed food. The gleaming machinery that turns the chiles into sauce is largely custom-built. William Tran, David’s son (and now the president of Huy Fong), describes his father as a tinkerer. “If he wasn’t making hot sauce, he’d be designing equipment,” William says. They even started making their own bottles, which (along with other innovations) has made the sauce less expensive to produce. In turn, they cut prices rather than increasing their profit margins. “We want to make a rich man’s sauce at a poor man’s price,” he explains.
While no one disputes the deliciousness of the sauce, there is some contention regarding its origin. “The sriracha sauce is not traditional,” claims William. “My father made it to satisfy his own taste.” Pim Techamuanvivit, the author of The Foodie Handbook and the blog chezpim.com, disagrees. “It’s the same Thai sauce that I grew up with,” she says. “It’s like taking ketchup to China and saying that you invented it and, coincidentally, decided to call it ketchup.” Perhaps, but it’s Tran’s American-made sauce, not the imported versions, that has captured the American imagination and taste.
Provenance aside, I came away from my meeting with the Tran family extremely impressed. And, as the owner of a small restaurant, I love their values. They haven’t sold out to a multinational corporation. They haven’t expanded too quickly. They are hardworking and focused on quality.
After my visit, I had some chef friends over for a sriracha potluck. Everyone made a dish using the sauce, and we ate and drank, relishing what cooks love most of all—the simple pleasures of the table.