You’re in the middle of a nice, hot shower, feeling your muscles relax, the day’s tension (or night’s sleepiness) melt away. As you bask in the quiet moment of repose, suddenly your body gets a startling jolt. After a second of disoriented shock, you realize something has happened to the hot water. Did someone start the washer? Is the water heater going berserk? Your hopes of relaxation now dashed, your stress level through the roof, you finish only the most obligatory rinsing and step out of the shower cursing, muttering and shivering as you reach for your towel. 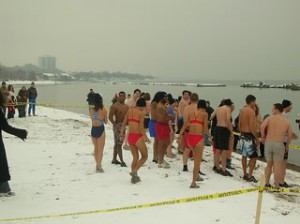 But does a cold shower need to ruin the day? Can they actually be more than a nuisance, but a legitimate health therapy as some say? We thought we’d do some digging to explore the notion MDA reader Alex recently put forth: “The way Grok kept himself clean sure wasn’t with sustained periods of temperature controlled hot water. Maybe we shouldn’t either.” The results we found were very intriguing (and encouraging) indeed.

The underlying premise of cold water therapy is that briefly and somewhat regularly exposing the body to certain kinds of natural stresses (like cold water) can enhance health. Promoters of cold water therapy say that it can boost immune function, decrease inflammation and pain, and increase blood flow. Some argue that a shower setting is suitable, while others say some level of immersion is necessary for real benefit. What does the research say? Here’s what we found.

The benefits of cold water therapy appear to depend on the subject’s adaptation over time. In other words, regular polar dips seem to enhance long term health, but a single cold burst in the shower won’t offer much beyond a good wake-up jolt. The power of cold water therapy, it seems, is in the habituation itself.

In studies comparing regular winter swimmers with subjects not adapted to cold immersion, winter swimmers showed an ability “to survive a significantly greater temperature gradient between body and environment than non-cold-adapted subjects.” Their advantage over the non-adapted subjects was a modification of the “sensory functions of hypothalamic thermoregulatory centres to lower heat loss and produce less heat during cold exposure.” The researchers concluded that regular winter swimmers show “metabolic, hypothermic and insulative” kinds of adaptation to cold temperatures.

Cold showers, research shows, can help this habituation process, but only water at 10 degrees Celsius (as opposed to 15 degrees C) made a difference. Habituation also seems to be somewhat long-term. In a British study, subjects’ responses showed that habituation to cold water lasted 7-14 months as measured by respiration and heart rate.

Some of the specific benefits? A German study examined oxidative stress associated with ice-bathing in regular winter swimmers and found these swimmers showed an “adaptive response” through enhanced “antioxidative defense” as measured by several blood markers.

Other research highlighting cold water’s effect on immunity shows an increase in both the number and activity of peripheral cytotoxic T lymphocytes in those regularly exposed to cold therapies.

Finally, the benefits of cold water therapy show promise for those with chronic fatigue syndrome, chronic heart failure, and some (non-lymphoid) types of cancers.

So, are you intrigued yet? Though the jury may still be out on some of the findings related to specific medical conditions, healthy individuals seem to have much to gain from the cold. It’s all about upregulating our systems, taxing them in a healthy, natural way like intermittent fasting. While the findings don’t suggest people should, in the name of health, give up hot showers altogether (who would give them up even if they did!) Alex may have a legitimate point after all. We will be keeping our eyes and ears open for new research around cold water therapy for future posts.

Some specific suggestions based on the findings? Very cold showers appear to be beneficial for the purpose of habituation, but we’d recommend alternating them occasionally with immersion when you can. Those of you in Northern climates might have more fun and social occasions (e.g. New Year’s polar dips) for such an exercise, but we can all spare the water heater for a day now and then for a nice cold dip in the old tub.