Perform the following exercises for time:

I always hear that I should be drinking eight glasses of water a day, but it takes a lot of unnatural effort to get close to that. Is it just me? What’s your take on the water rule? 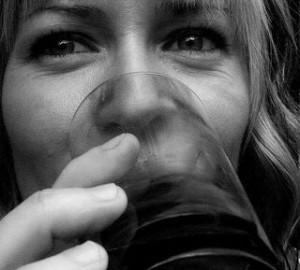 As you know by now, my job is to question Conventional Wisdom. One of the classic health paradigms I’ve always had a problem with is the blanket recommendation by the general health community that we all should be consuming copious amounts of water. It just doesn’t make sense to me and it never has. Face it, Grok did NOT walk around with a canteen or an Evian bottle affixed to his loincloth. He and the Grok family thought Nalgene was the name of the tribe across the valley and they never owned a sippy cup with which to gulp down mass quantities of H20. Day after day it was a drop here and a mouthful there – if a source of water other than a dewy leaf was even available. Since Grok and his cadre probably didn’t spend too much time hanging around the water hole. (All those predators you know…) 8 glasses of water a day is unlikely a physiological necessity, not to mention an evolutionarily relevant model. Grok obtained most of his water directly from the food he ate, and I believe that we probably should, too.

I don’t get thirsty very often. I rarely drink so much as a single glass of water during my normal daily routine. When I was a runner, and later as a triathlete, I would go out for long runs or rides without much water – if any at all. Sure I’d drink a bit to recover lost sweat when I returned home, but if I was riding for less than two hours, or unless it was unusually hot, I didn’t even put a water bottle on my bike. Even today when we take a break playing Ultimate Frisbee on hot Sunday afternoons, I have to force myself to drink sometimes when I might just as easily skip the water altogether. Meanwhile, I see people at the gym with 2-gallon bottles of Arrowhead, fully intent on polishing them off before dinner, thirsty or not. So, am I flaunting conventional wisdom at my own peril? Or am I just doing what comes naturally to a Primal being?

Years ago someone put forth the idea that we all needed to drink 8 glasses of water a day. Perhaps it came from a series of studies in the 1940s after which the Food and Nutrition Board of the Institute of Medicine opined that the “RDA” for water should be roughly 1 ml per calorie consumed. At their recommended 2000 calories a day, that worked out to 2 liters a day, or roughly 8 eight-ounce glasses. Lost in the translation somewhere was an important caveat that much – if not most – of the water we required could actually be obtained from the foods we eat. In other words, it simply was not necessary to actually drink 8 glasses a day. And since the recommended diet at the time included substantial portions of water-sopping grains, maybe that initial recommendation was too high for someone eschewing grains altogether. (On a related note people will tend to drink more if the beverage is flavored. And, guess, what: carbohydrates (particularly sweet tastes) encourage increased fluid intake. So, it’s useful to ask if the hankering is real thirst or a flavor related craving.)

Nevertheless, over the years, this hydration mandate has become burned into the health consciousness of most people. It appears that nearly every health guru (except yours truly) hammers on this point. Food doesn’t seem to count at all anymore. Eight means eight. And forget including coffee, tea, soft drinks or beer because Conventional Wisdom says that these are diuretics and therefore only increase your requirement for pure water. Of course, that’s wrong, because coffee, tea, soft drinks and alcoholic beverages do actually add to water intake rather than detract from it. Alcohol and caffeine only become significantly diuretic in very large and otherwise dangerous amounts. But I really wonder if all that extra water – however you take it in – is necessary or even healthy if you are already consuming lots of vegetables and other healthy Primal Blueprint food. The average person is said to obtain 20% of his/her water from foods throughout the day. If the bulk of your diet is vegetables and fruit, this percentage is assuredly higher.

Contrary to what your neighbor might advise you, there is no evidence that drinking eight or more glasses prevents constipation, kidney stones, bladder cancer, urinary tract infections or that it guarantees you’ll have clear skin and a toxic-free liver. Yet these are often cited as the main reasons to drink so much. And forget the so-called hyper-hydration properties of “clustered water,” “ionized super waters,” “penta-water” and the rest of the scam-waters, about which I have blogged in past posts. Water is water is water.

On the other hand, there are some possible health consequences of overdoing this hydration thing. Chronic over-consumption of water can cause the relative concentration of important electrolytes in the blood to drop, a condition called hyponatremia (Wikipedia), which in turn forces water out of the bloodstream and into cells, causing them to swell. Not a big deal for a muscle cell, but catastrophic when it’s a brain cell and there’s no extra space to expand into. Each year we read about people in endurance contests who sweat profusely, overcompensate by replacing the water but not the salts and wind up with cerebral edema. Last year a woman died in a radio-sponsored “water drinking contest,” drinking only about two gallons in a short period of time. Of course, those are extreme examples, but I do have several readers who have shared with me their intent on getting “100 ounces a day”, and I have to advise them to cut way back.

(The following contains my own personal hypotheses. I would love to see some research done in these areas. If anyone is aware of any please drop me a line.)

Conventional Wisdom suggests that drinking water with your meals is fine – even recommended. But I suspect that some heretofore undiagnosed digestive issues may arise when people drink significant amounts of water or other fluids with their meals. The digestive process starts with, and depends on, a very acidic environment in the stomach (a pH of 1 to 2 ideally). That highly acidic environment also controls the timing of when the stomach empties. When you drink lots of fluid at a meal, you are substantially diluting the stomach acid and diminishing its ability to effectively digest your food. I would guess that many cases of GERD, gas, stomach upset and other common complaints might be addressed simply by NOT drinking so much water throughout the day and refraining entirely from drinking while eating. (Except maybe a little wine, which, having a pH closer to stomach acid has been shown to aid in digestion) This might also explain why some proteins that only break down under optimum acid conditions pass into the intestines only partially digested and thus might be recognized by the immune system as “foreign invaders”, setting up some immune response that gets diagnosed as a food allergy.

Furthermore, unbeknownst to many people, the stomach is one of the first lines of defense in your immune system. Bacteria and yeast that are regularly consumed along with your food can be quickly and easily dispensed with in a very acidic stomach, preventing what might otherwise become a short term bout of food poisoning or a possible longer term GI tract infection. Dilute all your meals with water, however, and the pH rises enough to possibly allow those same bacteria to pass through to the intestines where all hell can break loose. Literally.

Even cold and flu viruses that permeate the air around us are generally rendered harmless when they reach a normally acidic stomach, (after being breathed in and drained with mucous into the stomach). Drinking a ton of water all day long just might disarm that security measure as well.

So how much water does a person need? I think this question exemplifies our tendency to over-think many aspects of our health and well-being. I’ve mentioned on a number of occasions that animals seem to get along just fine on their own instinct. Do we really think we evolved any differently? Thirst is a physiological instinct that is there for a reason. Still, the makers of this bogus rule also tell us that the thirst instinct comes “too late”: we’re already on our way to dehydration once we get to that point! This is where the paleo-perspective comes in handy. Has our “defective” thirst instinct been leading us wrong – for tens of millions of years? I think you know where I stand on this one. So if you actually feel thirsty, by all means have a drink. For anyone interested in a little history of the rule (and confirmation that thirst doesn’t signal dehydration), check this (PDF) out.

Our individual need for water depends on numerous factors. Activity level, body size, environment (humidity level and altitude, most significantly), quality of health, age, and pregnancy/breastfeeding impose the most legitimate variations. In general, we want to replace the fluids we lose in a day, and intensive activity (with its accompanying sweat) will increase the amount of fluid we need. (For prolonged, intensive exercise and/or significant water intake, it’s essential to balance salt/electrolytes with water.) The drier our climate, the more water we tend to lose, but unless you’re sitting out in the blazing sun for hours at a time, it doesn’t make a huge difference. Altitude, because of the body’s more laborious breathing, can increase our need. Those who are ill can require more, depending on their condition and any treatments they’re receiving. (People with kidney disease, kidney stones, a history of bladder cancer, or a tendency for urinary tract infections are usually advised to drink more.) Women who are pregnant or nursing definitely need to drink more. Finally, I mention age not because older men and women necessarily need more water. In fact, if they’re more sedentary, they probably need less. However, some research has shown that as we age our thirst instinct may not be quite as sharp as it used to be.

For most of us, however, we can safely rely on that brain stem of ours to tell us when it’s time to belly up to the drinking fountain.

One final word on water intake:

Bottled water is a joke. If you don’t trust your tap, get a simple Reverse Osmosis filtering system.