Contrary to popular belief, many healthy foods are no more expensive than junk food, according to a large new government analysis. 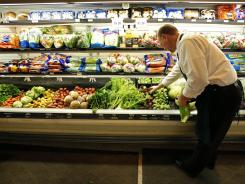 “Price is not a good excuse” for not eating a nutritious diet, says Andrea Carlson, who studies food prices and food consumption with an emphasis on healthy diets.

“The price of potato chips is nearly twice as expensive as the price of carrots by portion size,” she says.

Some of the least expensive foods and beverages by portion size:

Carlson and and her colleague Elizabeth Frazão gathered national pricing data on more than 4,000 foods and then ranked the foods by price based on calories, weight and portion size.

They placed the foods into the five food groups — grains, dairy, protein, fruits and vegetables. They added a category for unhealthy foods, which included items that did not fit the other categories or were high in sugar, sodium and/or saturated fat such as cookies, candy, desserts, granola bars and many ready-to-eat cereals.

She says one of the best ways to think of food costs is to consider portion size: “How much do you have to pay to put something on your plate?”

Previous research has just looked at price per calories and found that healthy foods are more expensive, but Carlson says price per calorie isn’t a fair measure. For example, non-fat milk has a higher price per calorie than 2% milk but most health experts recommend drinking non-fat or 1% milk, she says. “Whole milk and skim milk are about the same price per gallon at the grocery store.”

Another example: a half cup of broccoli has 27 calories while a one-ounce bag of potato chips has 154 calories. To consume 100 calories of broccoli, you’d have to eat almost two cups and that’s more than what most people normally eat in one sitting, she says.

Most people allocate only about of 20% to 25% of their food budget to fruits and vegetables, but the government recommends that it should be more like 40%, Carlson says.

Dawn Jackson Blatner, a registered dietitian in Chicago and author of The Flexitarian Diet, says that the latest report “is great information to help bust the myth that it costs too much to eat healthy.”

Cynthia Sass, a registered dietitian in New York City and author of S.A.S.S.! Yourself Slim, says, “Many of my clients are surprised to find that their grocery bills don’t go up when they swap processed goods for fresh foods, especially when they buy in-season produce and they’re eating ideal portions, meaning three ounces of cooked chicken, rather than six.”

Just giving up soda to drink fresh-brewed hot or iced tea, or water with a wedge of in-season citrus fruit can be a huge cost savings, she says. “And many of the healthiest superfoods in the market are inexpensive, such as beans and brown rice.”

Adam Drewnowski, director of the Nutritional Sciences Program at the University of Washington and lead author of a 2010 study that showed calorie-for-calorie junk food is more cost-effective than eating healthy, said he stands by his findings that a healthier diet generally costs more.

But Phil Lempert, editor of supermarketguru.com, says that with just a little preplanning before going grocery shopping, you can save at least 25% on your bill and eat healthfully. “The tradeoff may be that you have to spend a few more minutes in the kitchen doing food preparation.”